Life
This post may include affiliate links. See my full disclosure here. 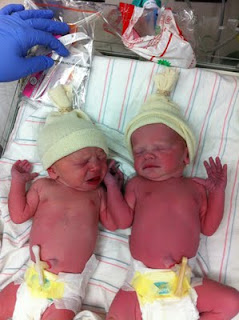 As I have been reminded numerous times that I have yet to post a birth story, here goes!

My pregnancy with the twins was completely uneventful. Other than trying harder to gain weight, actually gaining less, taking it a bit easier and having a huge tight belly, it was just the same as with my other babies. I knew I would go close to full term since I’m always overdue but still, at about 37 weeks I started anxiously awaiting labor. At 38 1/2 weeks I was getting pretty uncomfortable and then that night I had good solid contractions all night, 5 minutes apart, and I expected to go to the hospital soon. I dozed off between contractions and the next thing I knew, I’d slept until morning and labor had stopped. I was so mad!! Luke stayed home from work that day (Thursday) and Friday since we expected things to start up again any time.

All day Friday i was finally just miserable physically. It felt like i had to go to the bathroom all day and the pressure of two babies dropped so low was so intense i couldn’t sit for very long at all. At about 8pm I finally gave in and took some castor oil 🙂 I was super nervous that i would have a horrible reaction to it so I only took a tablespoon. Of course, no contractions 🙂 until at about 10:30 that night when they started again and were about 7 minutes apart. I didn’t want to call anyone for fear that it was false labor again. But as soon as Luke saw me have to pause and breathe through a contraction, he called the cavalry. He was so afraid of having babies in the car!

My parents and brother came over, and when my doula, Emily showed up, Luke and I, my mom and Emily took off for the hospital. When we got there it was midnight and all through getting checked in, my labor was nice and steady. We got placed in a room at about 1:30am and settled in to wait. Our nurse was awesome, a nice Filipino lady named Tess who knew her stuff. The hospital policy is that twins must be delivered in the operating room, even if vaginally. Tess called the doc (who happened to be a stranger since my doc was out of town and no midwife was available… So much for all that concern over finding the right provider!) and he assured me that as long as baby A was head down, he’d deliver baby B breech if necessary. Then they did an ultrasound and found that baby A was head down and baby B was sideways, almost headed the right way. My doctor had warned me that without an epidural, manipulating a baby into the right position could be really painful…which I already knew cause they did that to me with Liam before the c-section.

Anyway, labor kept progressing normally and was pretty bearable until about 3:30. I used the birthing ball and some other positions to try to get comfortable but I had a blood pressure cuff, oximeter and 2 fetal monitors on me, not to mention an immodest hospital gown so it was pretty hard to find a good position. Bless Emily’s heart, she was my lifesaver in a hospital that is not really designed for natural births. She rubbed my feet, clipped my sweaty bangs out of my eyes and fed me ice chips whenever the nurse wasn’t looking (i was also told not to eat or drink due to that ever present threat of surgery). At some point during this bad labor, i felt what I thought was my water breaking.

Tess checked my cervix right before 4am and although she said it quietly to my mom, I thought I heard her say 8cm. I tried not to think about those last 2 centimeters since I was about at my breaking point and was pretty sure I was minutes from giving birth. My mom really wanted to see the babies be born but only Luke was allowed in the OR so she kept telling me to not tell the nurse I was ready to push until it was too late :). So, when I first felt the urge, I didn’t say anything. Then the second push came and there was no hiding it since I started making some noise. Tess started working like mad to get more nurses in there, lay me down and start pushing the bed to the OR. Vivian was crowning by the time we hit the hall and her head was out before we got to the OR. That was my only real complaint about this birth…they were so intent on following hospital policy by racing me to the OR that no one stopped to catch my baby! Oh well, she came out the right way, and that’s the important thing. They got me in the OR, Vivian started yelling like nobody’s business, bright and pink and beautiful! I had a couple minutes to enjoy her and then i felt the urge to push again.

For a second I had forgotten that there was another baby in there and i started to feel a little dread! But Kira came flying out in about a push and a half. All I felt was intense pressure but Luke said Kira almost came out in her bag of waters before the doc reached up there and broke it. Luke said he did it so violently it kinda freaked him out. Again, pretty obvious that hospital staff is used to treating women who have epidurals and can’t feel anything :). Kira came out really blue and didn’t cry very well so they whisked her over to the bassinet and gave her some oxygen. She did great though, and both babies had Apgars of 8 & 9. 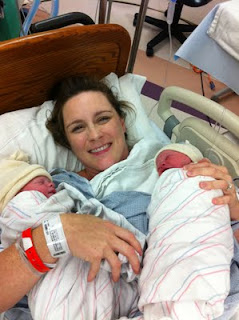 The pushing and births were all so fast and furious that I didn’t have much time to think about it all. Afterwards, we were just so grateful that everything turned out so perfectly. We were sort of local celebrities for a while too…there were extra people in there cause of the second baby so lots of nurses and techs followed us back to the room and my mom said the nurses station was talking about the vaginal twin birth for a while. What’s funny is that it was only a couple days before the babies were born that i realized another reason for avoiding a c-section: I would have 5 kids to take care of, including 2 newborns. That would take a lot of extra help to manage after major surgery and I hate asking for help :). That realization just made me pray even harder that we could have these babies vaginally. I now just need to wait and see if my body bounces back to what it used to look like, although I am highly doubting it. I have already been looking at mommy makeover in Newport Beach, CA just incase I decide to go down that route in the future, but for now I am going to let nature take its course and let it do what it needs to do.

Even though labor was more intense than with Juliet, I healed fabulously and felt great just hours after the birth. Remember my Thanksgiving Day post about being grateful for our bodies? Well I am even more thankful now and incredibly amazed at this blessing that is motherhood. What a miracle we can be a part of!

I'm Bonnie, a compulsive creator and mom of 9 kids (yes, you read that right). I'm passionate about life as a mom, fashion, and sewing cool stuff. Click to read more!

5 Unexpected Ways a Smart Watch Can Improve Your Life

Welcome to Bonnie and Blithe

A blog to help you find more BEAUTY & JOY in your life as a stay-at-home mom. Click to read more